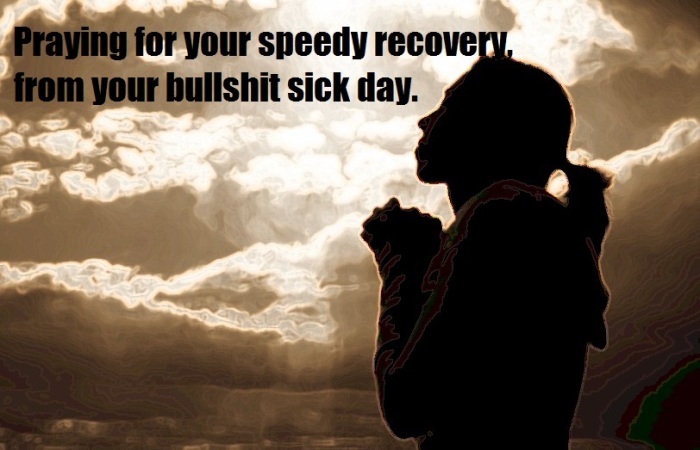 With American Thanksgiving in the rear view, I was curious to know if the number of Canadians who booked off sick this past Thursday was affected by the holiday.  Canucks love American football, Macey’s Day parades, and who’s kidding who, an impromptu day off during the work week is something to be thankful for.

I found nothing of consequence for Thanksgiving Day, but interestingly enough, Black Friday, the day after Turkey Day (legal looting day as I call it), showed a significant spike.

It’s estimated that 1.2 million Canadians, on average, call in sick on American Black Friday – just to take advantage of the incredible shopping experience.  To give you a better sense of the enormity of that statistic, that’s roughly 2.5 % of the country’s population, which, if you compared the percentage to the United States, would have equaled a whopping 11 million fake American sniffles and well-timed coughs.

All calling in sick.

A rite of passage, an employer’s nightmare.

For some, calling in sick is simple.  Pick up the phone.  For others, the mere concept of missing work presents an ethical dilemma, a decision fraught with trepidation and dire consequences.  The feeling of guilt, the perceived backlash from co-workers, evil-eyed scrutiny from management, all become precursors to an inevitable cerebral overload, a brain blip, culminating in the inability to make a decision.

We’ve all experienced it.  Debating the pros and cons, endlessly quantifying our illness on a self-imposed sickness scale, all the while traversing a continuum of ‘discomfort versus obligation’.  An indefinite loop of ‘should I or shouldn’t I‘.

We eventually make our decision, only to pause, sit back down, and reassess our thought process.  “Am I really that sick?”  “When was my last sick day?”  Then we acquiesce, despondent in the certainty that we’re going in after all.

Until the breath of an ill-wind overturns logic.

And just like that, we’re reaching for the phone, rehearsing our finest ‘at death’s door’ speech.  The deed is done.

Relief, regret, or guilt.  Which is it?

Employees calling in sick fall into one of three categories.  I’ve taken the liberty of naming them accordingly.

These are the co-workers who’ve never missed a day in 19 years.  Not one.  Either blessed with impeccable health, or perhaps impenetrable physiological fortitude, these Sick-Day Nazis will remind anyone who cares to listen, of their exemplary service record.  They disapprove of sick-time slackers, often with a glint of disdain, regardless of legitimate or extenuating circumstances.  Pneumonia, influenza, migraines, just excuses.

Nothing, on heaven or earth, will keep them from work.  Unfortunately, calling in sick from a member of this group likely means a stage 4 diagnosis, or worse.

Now You See Them, Now You Don’t

Chronic abusers.  These are the ones who believed the 1970’s rhetoric that North America was moving towards a 4-day work week.  When this didn’t pan out, they took matters into their own hands.  Despite the title, foreseeing their absence is not difficult.  Patterns are predictable and transparent; the Friday before a long weekend, the day after the Super Bowl, a mid-week Springsteen concert, St. Patrick’s Day. Not rocket science.

Calling in sick for this group is a straightforward process, orchestrated, sans stress.  Speed dial.  No conflict, no guilt.  They are masters.

Where the majority reside.  Middle ground.  Moderate Minions walk a fine line between commitment to the job, and an understanding and acceptance of personal well-being.  A balance.  Assessment of their personal sickness/discomfort level is typically honest, and while guilt occasionally manifests, Minions are generally confident in the knowledge that their sick days are justified – most of the time.

Calling in sick for Minions varies greatly from individual to individual – high stress to no stress, and everything in between.

Despite three distinct categories, there is no arguing that situations are not black and white.  Unique issues exist and a myriad of variables come into play, influencing an individual’s decision.  Paid versus unpaid sick days, career jeopardy, pride, whether or not you get the house to yourself if you stay home, all pertinent considerations.

Bottom line is, we all get sick.  Some of us drag ourselves in, regardless of who we infect, others don’t.  Our pain/discomfort threshold varies.  Our commitment to our employer varies.  Our ‘give a shit’ factor varies.

Some people love their jobs (a concept I’m not familiar with).  Some hate their jobs.  Some could care less.  Sick day absences vary, for a reason.

As a Canadian, our country is likely in line for a ‘National Sick Day’ World Award at some point.  Ever since the Canada-U.S.S.R. Hockey Summit Series back in 1972, when  Canada, playing the final game in Moscow, clawed back from a 2 goal deficit in the third period to win the game and series with 34 seconds left on the clock, we set the stage for any future on-mass nationwide sick day euphoria.  The entire country stopped to watch that game.  I was a kid in school at the time, huddled around a 12” black and white television with 200 others, watching the drama unfold.

And to this day, whether it’s the Olympics, the Junior Hockey World Cup, or any other final, we watch.  The country watches. And employers stay quiet.

And now, with Canadians feigning illness for the chance to max out their credit cards exactly one week before the Christmas shopping season officially begins, American Black Friday has climbed the charts as a serious sick day contender.

Canada/Mexico, sandwiching America.  It makes sense.  Let’s Panini-press the hell out of our continent.