According to the latest from our nation’s capital, marijuana will be legalized in Canada by July 1st, 2018, just in time for Canada Day.

There goes the neighbourhood.

While I won’t entice a debate on the pros and cons of our Prime Minister’s bold & brash announcement, I will pause to consider some of the changes one might expect. Regardless of which side of the fence you sit on, one thing is clear, the Canadian landscape is about to change.

Perhaps.  While it’s guaranteed the government will reap benefits in the form of regulation and taxation, the potential long-term ramifications on our health care system is concerning.  Free health care is a wonderful thing, but I speak from experience when I say that universal health care comes at a steep cost, especially for those firmly entrenched in the working middle class.  Some refer to it as outrageous taxation.  I refer to it as bend over, we want more.

But perhaps legalization of cannabis will impede organized crime?

Doubtful.  And if you give any credence to the whole ‘gateway’ drug theory, many, especially our at-risk youth, will likely establish an entirely new customer base for unscrupulous traffickers.

But that’s the shady side of the fence.

On the brighter side, in a country where one has to pay upwards of 250% more than our U.S. counterparts for a case of beer, or bottle of liquor, a little domestic marketplace competition may not be such a bad thing.

And then there’s the boom to the tourism industry.  Fear of igloos, rutting moose, and Justin Bieber, may no longer deter potential visitors.  The floodgates will open.  The top ten tourist destinations for certain ‘recreational’ travelers may change; Amsterdam, Jamaica, Toronto.  We’ll finally be on the map.

Note to self – invest in a food truck.

The Liberals touted ‘marijuana legalization’ as one of their party platforms in the last Federal election, and were swept into power by the majority.  And to their credit, it appears they have done their homework, recommending stringent guidelines and regulations, before opening Pandora’s Box.  The proposed minimum age to legally smoke marijuana in Canada will be 18, although each Province will be granted the power to impose their own minimums.  As well, each household will be strictly limited to the amount of personal-use marijuana they can grow at any one time, at 4 plants.

So it’s not like they haven’t thought this through.

And for anyone left shaking their heads, wondering how this proposition out of (left) field gained such traction, consider this.

What better way for hockey, often criticized as a violent sport, to evolve into a passive, easy-going, ‘let’s not even keep score’, pastime.  Substitute pot for beer, and the fan base may change.

The game may change.

I only hope that next year, consideration is given to asking Tommy Chong (the Canadian half of Cheech & Chong) to be Grand Marshal of the Canada Day Parade in Ottawa.  I can picture him, seated inside his Lowrider, dice dangling from the rear view, smoking a joint, waving to thousands of adoring fans.  Happy Cannabis Day.

That would be spectacular.

,
.
And if not Tommy, then perhaps Canada’s other famous cannabis advocates from the East Coast, the Trailer Park Boys.  What better way to show the world what Canada is all about.
. 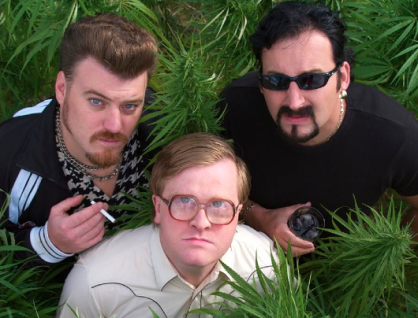