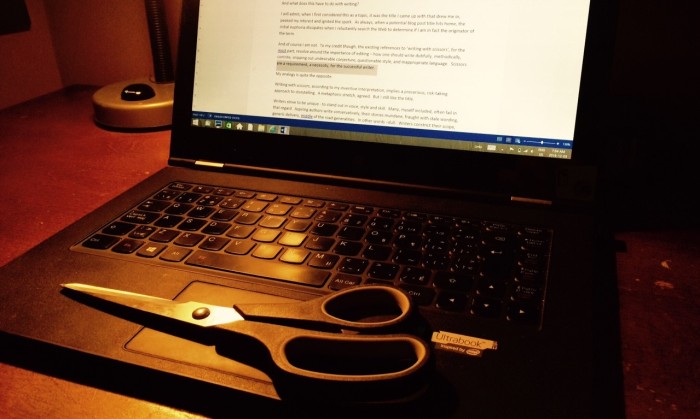 We’ve heard the expression ‘running with scissors’, an analogy warning unruly children of a potential impaling should they ignore common sense and challenge convention.  Like many, I grew up hearing the phrase, heeding the warning, careful not to upset society’s delicate balance, or my mother’s ire.

The concept is sound, albeit simplified. Civilized people shun unruly behavior.  As kids we’re taught to play safe, to act conservatively –to behave.  But occasionally, as is life, some abandon the safety of cultural norms and venture beyond the barriers of the status quo, pushing past the limits of societal acceptance into uncharted, precarious domain.

Some of us run with scissors, regardless of the consequences.

So what does this have to do with writing?

I will admit, when I first considered this as a blog topic, it was the title I came up with that drew me in.  A clever moniker or enticing catch-phrase has the tendency to do that.  As always, when a potential blog post title fires me up, the initial euphoria dissipates when I search the Web to determine if I am in fact the originator of the title/caption in question.

And of course I am not.

To my credit though, the preexisting reference to ‘writing with scissors’, for the most part, revolves around the importance of ‘editing’ – how one should write methodically, contrite, snipping out undesirable passages, questionable structure, and inappropriate language.  Scissors are important, a necessity, for the successful writer.

My analogy is quite the opposite.  And my metaphor, quite strained.

Writing with scissors, according to my liberal interpretation, refers to a precarious, risk-taking approach to storytelling.  A metaphoric stretch,  I agree, but I still like the title.

Writers strive to be unique – to stand out in voice, style and originality.  Many, myself included, often fail in this regard.  Far too many of us write conservatively, pumping out mundane stories fraught with generic language, stale delivery and bland generalities. In other words –dull.  Writers often inadvertently constrict their scope, rein in their abilities, and fail to tap their creative potential, for fear of failure, criticism, or ridicule.

To break the pattern, to stand above the crowd, aspiring writers need to push the limits, step out from their comfort zone, and test their creative mettle.  They need to expand their range, to become bolder (brass-cojones bolder), and explore their untapped capabilities.

A leap of faith.

Similar to free writing or journaling, the process is about discovery, unleashing your wild, primitive side, that creative doppelgänger we keep locked away, restricted, supervised, jailed.

While taking risks and writing on the edge (of sanity) is not for the weak-willed, the process is essential for growth and development.  Terminating the internal ‘editor’, at least during the initial draft, is critical.  By shutting down your boisterous internal critic you avoid the mundane, the common denominators, the also-rans.  This alone will pave the way for unexpected results.  So what if some confidential (things I only divulge to my therapist) thoughts manifest on the page.  The content will be literary platinum, intriguing, gripping, relatable.  It’s those hidden thoughts and desires, those secret passions, delusions and fantasies that make for memorable writing.  Once you abolish inhibitions, write like nobody’s reading, and swing for the fences, magic happens.

If the mood strikes you, cliché your goddamn heart out.  Tell, don’t show.  Switch from first, second to third person on a whim.  If you catch an adjective, leave it.  Sprinkle adverbs generously.  Throw in some Deus Ex Machina if it feels right.

For anyone who’s not tried this method, I recommend it.  What’s there to lose?

When you abandon convention, muzzle your editor and ignore the rules, you embark upon a journey of discovery –from within.  Everything changes.

47 thoughts on “Writing with Scissors”