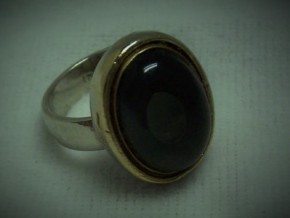 Had I been wearing a 1970’s mood ring earlier this week, I know what color it would have been. I won’t get into the specifics, sufficed to say I didn’t have to clean the cat’s litter box one particular morning –because she opted not to use it. The ensuing treasure hunt to locate the offending nugget, the cleaning, disinfecting and subsequent banishing of the culprit (Gizmo) to the basement for the duration of the day, made my morning unpleasant, to say the least.

Not a good start.

And yet on the drive in to work, with a scowl on my face, I confronted my bad mood, arguing my day need not be ruined because the cat in the hat, shat (for the second day in a row). The passionate debate raged on, fueled by anger, countered by logic, and by the time I arrived at work, my scowl had dissipated –somewhat.

Despite the science behind thermochromism (the change of color due to temperature), the multi-colored spectrum found in a mood ring’s instruction manual, is misleading.

There are no shades of grey, no greens, pinks, or purples, no middle ground. You’re either in a positive mood, or a negative one.

The more I pondered the concept, the more I realized moods are configurable, a conscious choice. Good moods are simple, when you find yourself in one, stay there, ride it out, spread the love.

Conversely, when the ring darkens, pause and take inventory.

Simple also, but not quite as easy.

Bad moods dissolve in time, they always do, but when allowed to fester, they devour the present, drain joy from the moment, and spread like an airborne virus.

The trick is to recognize the ensuing darkness, pause, regroup, and change colors. Don’t let the voice of rage and ruin convince you otherwise.

Two weeks back I was editing some fiction when I inadvertently overwrote my file with an earlier version, thereby deleting two hours of work. Attempts at retrieving the lost data proved futile, Microsoft Word had no magic elixir to counteract stupidity. The changes were lost.

My metaphorical mood ring turned as black as a raven in a mortician’s hat.

But that was two weeks ago.

This week, Gizmo –the cat who shat, prompted some introspection.

She taught me to recognize that every moment counts. Being miserable, waiting for the fog to clear, is counterproductive.

So I encourage you, the next time you sense a Bad Mood Rising, don’t hunker down waiting for sunshine, embrace the earthquakes and lightning, and change your color, tout de suite.