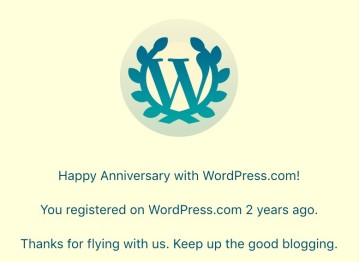 November 2017 marks two years since the inception of my Blog. To commemorate, I’m taking my laptop out for dinner and drinks later.

Two years may be a drop in the bucket for some, but for me, it’s a significant achievement, one I humbly acknowledge. While my posting frequency has grown sporadic as of late (including the occasional—and dreaded—re-blog), I’m still at it, still posting when I (think) I have something of value to share, and still engaging with my Bleeps (BLogging pEEPS—a term I just made up).

That depends on how you define success. If monetary gain, fame and a 1000-hits-a-day are your sole motivators, you should probably look elsewhere.

But, if your goals hinge on surviving an exponentially growing cyber arena where 90% of new blogs extinguish within 3 months; I’ll share with you two things I’ve learned along the way:

If you’re not writing for yourself, it won’t work.

If you want a following—engage. You get back what you put in.
.

And there you have it.

The recipe for mediocre blogging success.

I have a dinner date.