How does the first line of your manuscript stack up?  Happy with it?  Have you rewritten it so many times you’ve forgotten what your novel is about?  Or conversely, did you come up with an opener so fantastic you rewrote your manuscript to make it fit?

If any of this sounds familiar, you’re not alone.  The importance of that first sentence is crucial.  Whether you’re an A-list author, struggling novelist, or aspiring children’s book writer, starting your manuscript with an enticing hook is a challenge.  Incorporating ‘theme’, ‘voice’ and ‘sense of story’ into one magical line may seem formidable – a task so great the remainder of your manuscript appears insignificant.  The cruel reality of fiction today, unfortunately, suggests that unless that first line sparkles, page two might as well be page six hundred and twelve.  It won’t get read.

So what is the purpose of the first line? I mean other than expediting a sale?

The first line should grab the reader and transport them into the author’s world.

Yes, but it’s simpler than that.

The purpose of the first line is to propel the reader onto the second.  That’s it.  If achieved, and the pattern repeats, you have succeeded in springing the author’s trap.

The power of the first sentence sets the novel’s tone and captures the reader’s interest at the outset.  Length is irrelevant, some of the most famous first-liners are refreshingly concise, consider; “Call me Ishmael” (Herman Melville), or “It was the best of times, it was the worst of times” (Charles Dickens).  Or a more recent addition to the category of great openers; “I’m pretty much fucked” (Andy Weir – The Martian). Whatever the genre, no matter who your target audience is, the first sentence must captivate.

What about the other side of the coin – terrible openers.  Know of any? 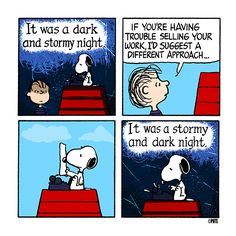 Back during graduate school, Professor Rice wrote a term paper on Edward George Bulwer-Lytton, the author famous for penning the opening line; “It was a dark and stormy night” (contrary to popular belief Snoopy did not write this).  After suffering through years of judging writing contests with questionable applicants, Professor Rice came up with the idea to celebrate the terrible writer by introducing the Bulwer-Lytton Fiction contest. The contest began quietly in 1982 with a handful of applicants, and has grown significantly in size and popularity, now receiving thousands of submissions annually, along with worldwide media attention.

And the premise behind the contest?

In sixty words or less, entrants compose the opening sentence of the worst of all possible novels.

Competition is fierce.  Winners and runners-up are announced annually over several categories, with their winning submissions posted on the website.  As for cash prizes and awards, the website sums it up nicely:

“Finally, in keeping with the gravitas, high seriousness, and general bignitude of the contest, the grand prize winner will receive … a pittance.”

The lack of recognition by way of prizes and notoriety does not deter would be applicants, entries have increased each year.  Below is a snap shot of some of the ‘best of the worst’ first lines.  See for yourself.

Corinne considered the colors (palest green, gray and lavender) and texture (downy as the finest velvet) and wondered, “How long have these cold cuts been in my refrigerator?” Linda Boatright

When Mr. Bilbo Baggins of Bag End announced that he would shortly be celebrating his eleventy-first birthday, his children packed his bags and drove him to Golden Pastures retirement complex just off Interstate 95. Stephen Farnsworth

If old Elijah’s warning about the North Korean cruise ship of Liberian registry, crewed by Thai slaves wasn’t enough, dinner at the Somali Captain’s table in a lifeboat near confirmed it. Paul Ross

Duane made a very unfortunate zombie; the coroner had removed his dentures and all of his clothes before he reanimated–thus he was destined to stagger naked through the woods, attempting to gum small animals to death. Stephanie Leanne Myers

Despite the vast differences it their ages, ethnicity, and religious upbringing, the sexual chemistry between Roberto and Heather was the most amazing he had ever experienced; and for the entirety of the Labor Day weekend they had sex like monkeys on espresso, not those monkeys in the zoo that fling their feces at you, but more like the monkeys in the wild that have those giant red butts, and access to an espresso machine. Dennis Barry

So, where does your opening sentence lie?  A candidate for literary accolades, or future Bulwer-Lytton Fiction Award’s submission?

If you chose the latter, the deadline for the 2016 Contest Submission is June 2016.  And don’t fret if you have more than one manuscript hibernating in your desk, multiple submissions are allowed.

9 thoughts on “Does Your Novel’s First Line Measure Up?”