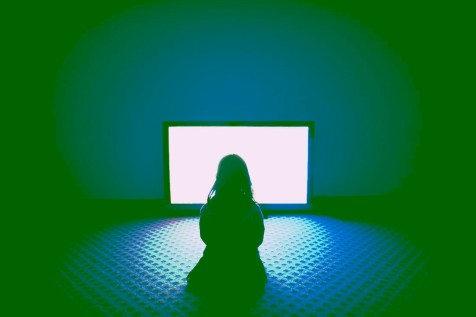 This post breaks one of the cardinal rules of successful Blogging, that is –don’t write primarily about yourself.  With millions of blogs to sift through, readers want something they can use, learn or benefit from.  This is may not be that post.

Pardon me while I self indulge.

We’ve all faced that blank page.

Whether it’s a novel, script, article, or weekly blog post, reluctance to write versus initiative to create, is an epic battle.  I’m not talking writer’s block specifically, more so the general dread of confronting that creative vacuum, especially when so many pleasant alternatives exist.  Like folding laundry.

Five years ago I phased television out of my life.  Not that I was an addict, but my writing regime suffered, runner-up to every menial task imaginable.  Something had to go and television drew the short straw.  For the next while TV was regulated to weekend movie nights, a sprinkling of sports, and the occasional 24/7 catastrophe coverage on CNN.

Things went well.  I could breathe again.  Life was wonderful.  I felt reborn, started running, even contemplated veganism and trading in my Ford Explorer for a Prius, but didn’t get quite that far.  More importantly, my writing regime progressed, creativity flourished, and productivity rose.

And my inroads vanished – overnight.

How things happened so quickly, I never understood.  Cable television was never like this – a world of commercial-free, seemingly endless entertainment, at my fingertips.  Within days of inception, Netflix marathons began.  Complete seasons devoured in a day, endless horror film bonanzas, subtitled movies in Korean, German, Spanish, documentaries, seasonal specials, and 565 episodes of The Simpsons.  My writing slowed from a trickle to an infrequent drip of lost aspirations.  While I did gain creative inspiration from programs like ‘Lost’ and the ‘Walking Dead’ (my genres of preference), the bulk of my viewing accounted for little more than neuron-numbing sedation, detrimental, fatal, to the creative muse.

My free fall from grace was immediate and without remorse.

Like an alcoholic, leaping from the wagon of unfulfilled desires, I landed squarely in the grip of time bandits.  Guilt manifested itself in subtle ways, gnawing at my subconscious, occasionally tampering with the batteries in my remote.  Each night I would promise myself a new beginning.  Each morning the promise was forgotten.  My laptop silently chastised me, untouched and dust ridden, demoralized and demoted to a gathering spot for my collection of electronic accessories.

And when the time came that I’d watched everything there was to watch, a singular choice remained.

On a visit to Florida, the ‘aha’ moment hit when I realized American Netflix had twice the content of its younger Canadian sibling.

Back home, despite my promises, I realigned my priorities, adjusted my mindset, and circumvented Netflix’s DNS protocol, fooling Netflix into thinking my internet provider was located in the U.S.  Canadians pay the same monthly fee, so what was the harm?

Just like that, American Netflix, in all its grandeur, opened up a new pathway to oblivion.

I could not look my laptop in the eye.

But I did start writing again.

Inspired by six seasons of ‘Lost’ and the short-lived BBC series ‘Survivors’, I began working on an original television pilot in a similar vein.  Not long after, I began my Blog.   Aspirations for longer works of fiction including an e-book followed.  As for Netflix, moderation prevailed, the struggle subdued.

My mission was realized, my vision clear, my path alit.  I was unstoppable.

For those not familiar with it, an Android Box is basically Netflix on steroids.  No limits.  And no monthly fee.  The small, nondescript box roughly the size of a CD drive, cost less than $100.  All you need is WIFI, a television, and a world of infinite entertainment awaits.  Indeed.

No longer constrained by Netflix’s miniscule selection of 10,000 titles, we’re now teetering on the brink of perpetual preoccupation.  Literally.   Feature films (many still currently in theaters), specialty networks, entire television series, international programs, sporting events, adult content, news from around the world, all through this tiny, unassuming device.  Pure evil in a Box.

Pandora has nothing on Android.

The page is blank once again.

I’ve been told acknowledging you have a problem is the first step to recovery.

My weakness as a writer is discipline.  My kryptonite.  Some may argue that’s the least of my problems, a sampling of curt rejection letters will attest to that.  Although I’ve used the ‘seat of the pants to seat of the chair’ analogy often, the concept eludes me. Day-to-day life, full-time work, hectic schedules, all play a part in challenging writing schedules, but mindless sensory addictions have no place in the arena.  I don’t blame the ‘muse’.  I won’t go there for fear of instilling wrath.  In the words of accomplished author Nora Roberts; ‘every time I hear writers talk about the muse, I just want to bitch-slap them”.

Is it procrastination, or is it something more?  Lazy.  Lazy, comes to mind.

If not for WIFI, I’d have a volume of works Steven King would admire (okay, slight exaggeration).  Not that any of mine would be published.  But that’s okay.  Despite the struggle, and the harsh words of Nora, I take comfort in a less accusatory quote by French author Michel Butor: “Every word written is a victory against death”.

Perhaps for me, every word written is a victory against ‘the Box.’

I conquered Cable, I can defeat ‘the Box’.

We make time for the important things in life.  For me, writing is life, a way to pause moments and capture them for a lifetime.  So back onto the wagon I go.  Time Bandits, disperse.

But first, season six of the Big Bang Theory.

I already watched it.